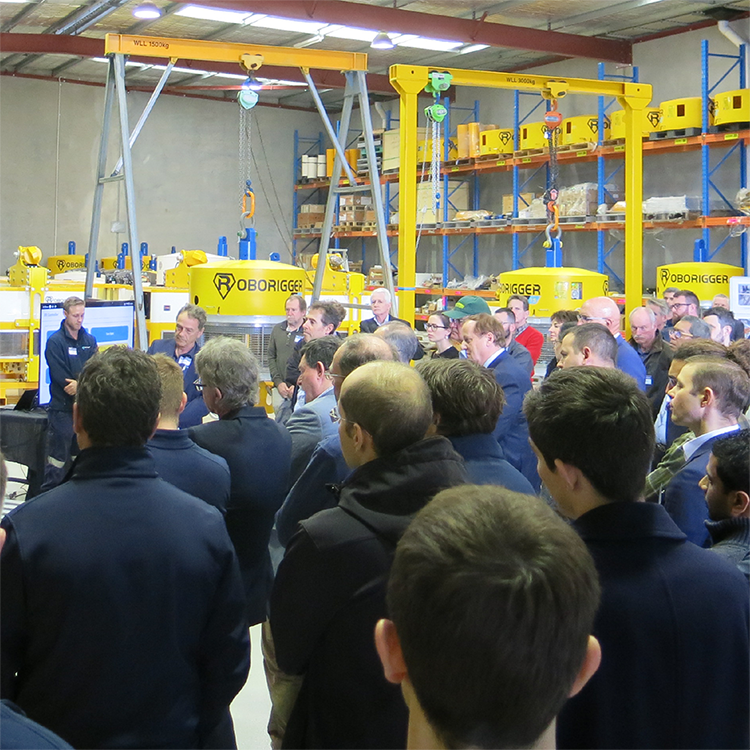 The facility will allow Roborigger to scale its manufacturing operations to meet the demand for the product that has now arisen in Europe, Japan and other overseas markets.

Roborigger units have been in operation in Australia since the first unit was used on the New WA Museum in Northbridge in 2018. Roborigger units are currently operating in Sydney, Melbourne, and Perth and at several sites in the Pilbara. The company has also shipped units to Singapore, Japan, Dubai, Germany and New Zealand and continues to receive demand for additional units in these regions.

The WA government has been instrumental in assisting Roborigger maintain its development progress through the COVID-19 restrictions. This has helped fund Roborigger to have its units certified for use in Europe and to build sophisticated load test equipment needed for the manufacture in Perth using WA suppliers.

At the opening, Roborigger demonstrated new products and technology in development including a voice controlled operation system for Roborigger units and a novel data capture system that allows all load movements by Roboriggers or forklifts anywhere in the world to be automatically recorded and accessible on the web.

Roborigger Managing Director Derick Markwell stated that these developments will revolutionise the way information is made available for crane lifting and logistics management since it not only has the functionality we are familiar with for online parcel tracking but adds images, weight and location as well as information from the company’s commercial system.

“It means that wherever you are, you can find your load and see it when it was last moved without having to attach the expensive tracking devices that are currently used.” Markwell said.

Roborigger also announced that it had appointed JOTO Sangyo Co. Ltd as their agent in Japan and had entered into a cooperation agreement with JOTO and Sumitomo Mitsui Construction Co., one of Japan’s largest construction conglomerates, to use the Roborigger system in its SQRIM fully precast concrete construction method for high rise buildings. Markwell commented that this is world leading technology equivalent to using driverless cars on roads. Japan is a unique environment where they have an aging population and shortage of construction workers as well as a passionate interest in automation and technology to improve their businesses.

“We are really pleased that we have been selected to be involved on this project.”

“We are now seeing Roborigger deployment picking up speed exponentially. We will have Roborigger working on Sydney and Auckland metro projects, mega projects in Dubai and Abu Dhabi, a shipyard in Germany, building powerlines and handling loads in the Pilbara, on revolutionary high rise buildings in Japan and loading equipment onto supply boats for offshore drilling. It really is exciting to see the momentum we have gained.” Markwell said.

Hon Don Punch MLA, WA Innovation and ICT Minister said “Roborigger is key example of the outstanding innovative and entrepreneurial work that is occurring in WA, and the State Government is proud to have supported its development with funding through both the Local Capability Fund and the WA Innovator of the Year programs.”

“Congratulations to Derick and the entire Roborigger team on the official opening of your new Wangara factory today. It is a pleasure to see the wholly Western Australian innovation continuing to build their workforce locally from a wealth of WA talent and capability.”

This story was originally published by Roborigger.