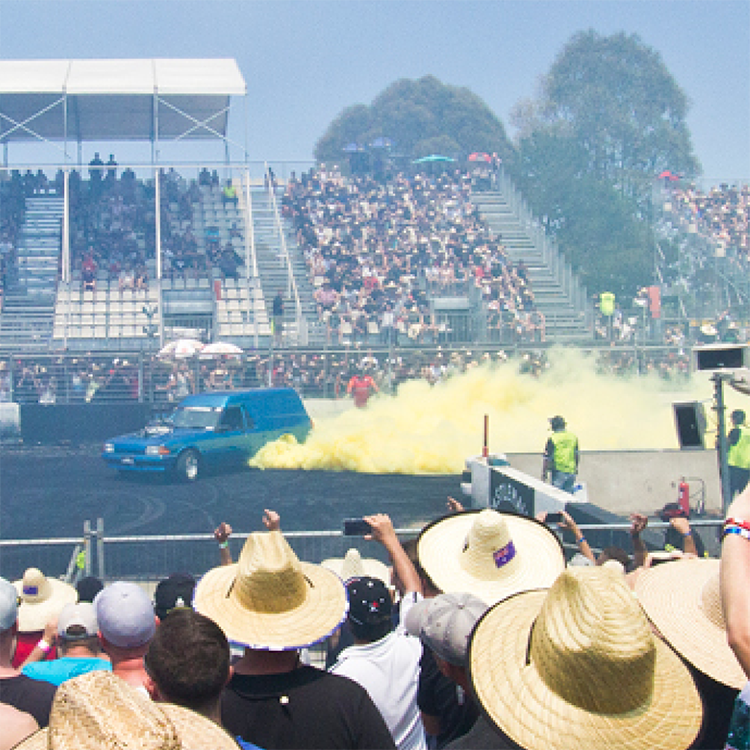 A ban on mass gatherings that forced the postponement of Australia’s premier car festival – Summernats – hasn’t stalled the event’s rise in popularity in the US thanks to a gaming app that has been downloaded more than 1.5 million times.

In a normal year, Summernats attracts 100,000 car lovers and injects $30 million into the Australian Capital Territory’s economy. The event is a key pillar of Managing Director Andy Lopez’ event management and festival businesses.
Despite the pandemic’s “catastrophic” impact on their events line-up, Mr Lopez, his business partners Dominic McCormack and Andrew Bee, and staff of twelve have pivoted the business to attract online revenue streams. Their focus has also shifted to long-lead planning for what’s shaping to be a bumper year ahead.
The Burnout Masters gaming app launched earlier this year has not only raised the profile of Summernats in the lucrative US market, it has provided a steady income stream from in-app purchases.
The app is based on the real life Burnout Masters series which culminates each year in a national grand final at Summernats. “We’ve spent the past ten years growing Burnout Masters as a sport. It’s an emerging motorsport that is incredibly popular around Australia.
“It looks loose as a goose but it’s actually run as a proper motorsport competition. Mr Lopez said the business partnered with developers Road Burn towards the end of last year to create a game based on the real life series.
“Road Burn did the tech and we did the creative content and licenced the brand, all with a view to making a product that was going to be successful overseas.
“Americans have always had an immense fascination with Australian burnouts and we’d done a lot of work already to raise our profile internationally.”
The Burnout Masters app has also proven to be popular in Europe and South Africa, with more than 400,000 downloads in those territories. On top of the gaming app, Mr Lopez said the team has pivoted merchandise sales from live events to a lifestyle brand for retail sale online. “We have influencers and advocates who promote our stuff in America and we are already seeing international sales grow, which is awesome.
“We’ve developed other revenue streams, some of which we were already doing but it became obvious it was more important to generate that income. The success of his digital ventures aside, Mr Lopez said the team is looking forward to running a series of smaller events next year and, circumstances allowing, the return of a bumper crowd to Summernats in January, 2022.
“We’ve got a small Summernats event that were holding back at our [Canberra] venue in March. There’s Rockynats [in Rockhampton] in April; and we’ve got a new partnership for an event in WA.
“And we’ll have our Red CentreNats back in Alice Springs on Father’s day next year. So from an events point of view we’re really busy. “In 2021, all things being equal, we’ll have a pretty mental sort of year.